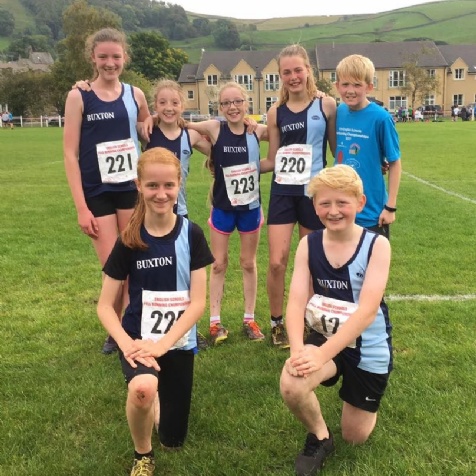 Buxton Community School fielded a team of 11 youngsters in the prestigious English Schools Fell Championships on Sunday 24th September 2017.  Hosted by Giggleswick School in Settle, the 10th Championships saw youngsters from schools the length and breadth of the country coming from as far afield as the Isle of Man. Athletes took part in a challenging series of races over the steep slopes of Sugar Loaf Hill on mixed terrain which proved very soft underfoot with several youngsters returning having lost shoes in the bogs!

Leading the team home was Lauren Wilshaw, current U13 Silver medallist in the English Junior Fell Championships, who finished an outstanding 4th overall in the Year 8/9 girls race.  She was followed by team mates Abbie Fryer-Winder in 37th, Katie Ivings in 44th, Izzy Ivings in 50th and Ava Hazelhurst 56th - 189 youngsters ran.  The Year 8/9 team finishing an outstanding 3rd overall!

Luke Guise represented the school in the Year 7 race coming in 40th and Gregor McGill represented the Year 8/9 boys finishing 52nd. In the Year 10/11 girls Ellie Wilson finished and outstanding 12th with team mate Heather Wilshaw not far behind in 21st place.  In the Year 12/13 boys race Elliot Meylan had a tough battle with the newly crowned Home International Gold winning team but he held his own staying with the front runners to finish a creditable 14th position.

Mr O’Brien, Head of Physical Education was naturally delighted with the performances. “I am impressed with the enthusiasm and depth of talent in the specialism of fell running in Buxton. The athletes participating have been fantastic in demonstrating the grit and determination to perform so successfully in a national championship. Everyone at the school and across the town should be rightly proud of their performance”.